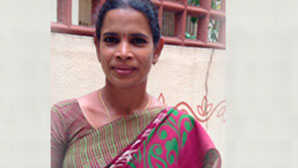 THE STORY OF AN OUTREACH WORKER: Sharing her learning to save lives

Chanumolu contracted HIV from her husband. Now widowed, she shares her story with others to encourage spousal testing and stress the importance of anti-retroviral treatment.

Chanumolu was not told about her husband’s HIV status before their wedding. He died five years into their marriage, leaving her to support herself and their daughter. After working as a bookkeeper for women’s self-help groups, Chanumolu became an outreach worker in an HIV-TB reduction program.

She says, “revealing my HIV status has motivated many people living with HIV to stick to their anti-retroviral treatment and seek spousal testing.”

Chanumolu’s example shows us that being open and honest about HIV can help save lives.