The lockdown imposed to contain Covid-19 has made it difficult for people with other diseases to access the medicines they need to survive.

In the past two weeks, Ranvir and his brother Suresh (names changed) made two trips to the municipal hospital closest to their home in central Mumbai, desperately hoping to get an appointment with Ranvir’s pulmonologist. Both times, they found a nearly empty outpatient department, a handful of hospital staff and no sign of the doctor.

“The staff had no idea when the doctor will be back. But if we don’t get an appointment, I am afraid my brother’s condition will get worse,” said Suresh, a cook at a small restaurant and the primary caregiver for 36-year-old Ranvir, who is living with both HIV and tuberculosis.

Ranvir takes a combination of four different drugs that help to fight his diseases, but at times they also trigger troubling side-effects. In mid-March, for instance, as Covid-19 began to spread across India, Ranvir developed a fungal infection around his genitalia in reaction to one of his TB medicines.

He needed immediate medication, but the novel coronavirus pandemic unexpectedly came in his way. Hospital OPDs began scaling down their daily operations at least a week before the central government announced a complete nationwide lockdown on March 24. Once the lockdown began, transport restrictions made it difficult for Ranvir to approach any other hospital or doctor further away from home.

“My brother is at higher risk of catching coronavirus, so we have to be careful,” said Suresh. “But right now, without a check-up or medicines, his fungal infection is already spreading.”

Ranvir’s woes do not end there. In two weeks, he will run out of his regular TB and HIV medicines. “If the lockdown is extended and we are not able to go and get more medicines, I don’t know what we will do,” said Suresh.

Without timely medication, both HIV and TB patients are at risk of developing drug resistance, making it harder for their medicines to work when they do get back on them. This, in turn, would mean deteriorating health and lower life expectancy. 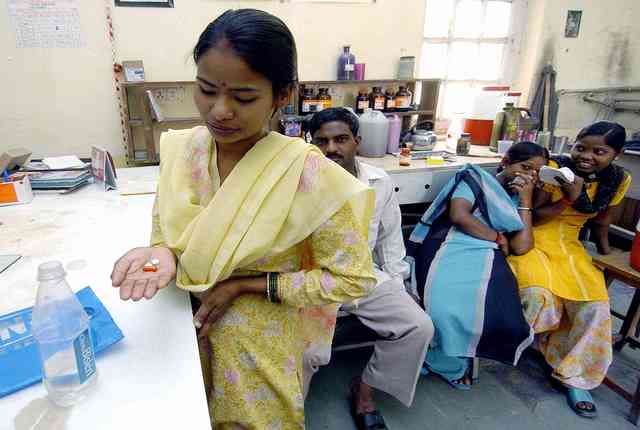 Ranvir is among thousands of Indians with TB and HIV whose lives have been upended by coronavirus lockdown.

India reports more than 25 lakh active tuberculosis patients and more than four lakh TB deaths every year – the highest in the world. India also has the largest number of cases of multidrug-resistant TB, a more virulent form of the disease that is harder to cure. The country’s HIV data is also dismal – there were more than 21.4 lakh people living with HIV in 2018, and 69,000 deaths.

Covid-19, a flu-like disease caused by a newly discovered strain of the coronavirus, has infected more than 12.7 lakh people and killed nearly 70,000 people globally since it emerged in December 2019, stretching the healthcare systems of several developed countries beyond their limits. In India, where Covid-19 has claimed at least 111 lives and infected 4,281 so far, the 21-day lockdown announced on March 24 was an aggressive attempt to rein in the contagion.

But the lockdown was also sudden and poorly planned, at the cost of India’s most marginalised inhabitants. It triggered, for instance, a mass exodus of migrant workers who began walking hundreds of kilometres from cities to their villages in the absence of public transport. Many died in the attempt.

The lockdown has also disrupted the supply-chain of essential goods and services, including the medicines that patients with tuberculosis, HIV/AIDS, cancer, diabetes and other life-threatening diseases rely on to stay alive.

Patients, caregivers, doctors and activists are now worried that the nation’s attempts to address one public health crisis might end up severely jeopardising efforts to end others.

“Right now, people who have diseases like TB are getting affected in every way, from testing, diagnosis and registration of new cases, to follow-ups and access to medicines,” said Dr Anand Das, a TB-specialist doctor from Delhi. “India will probably hit the peak of the Covid-19 pandemic by the end of April, by which time we will perhaps inflict more harm than good on patients of other diseases.”

A struggle for medicines

Tuberculosis is a notifiable disease in India – every case must be reported to the government – and its medicines are dispensed at both public and private hospitals and clinics. At public hospitals, they are available free of cost, since TB disproportionately affects the poor.

With the coronavirus lockdown, access to TB drugs in both urban and rural India has been hit.

“Since the lockdown began, there has been a clear decrease in the number of TB patients coming to our clinic to get their monthly medicines, because they are not able to travel to us,” said Dr Pavitra Mohan, who runs a non-profit private health clinic in Rajasthan’s Salumbar town in Udaipur district. 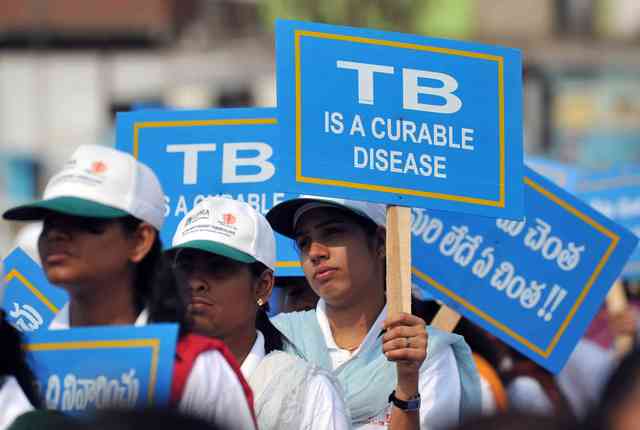 Since caregivers of many rural TB patients do not have private transport to take them to Salumbar, health workers from Mohan’s clinic have been trying their best to reach as many patients as possible. Last week, for instance, one of Mohan’s colleagues drove to a village 60 kms away to deliver medicines to a patient who missed his monthly appointment despite trying to find ways to travel.

But Mohan remains concerned about other patients who depend on public health centres to get their drugs. Technically, says Mohan, the government does have grassroots health workers like ASHAs (accredited social health activists), ANMs (auxiliary nurse midwives) and community volunteers who could be deployed to hand out TB or HIV medicines to patients in villages. But most health workers have now been asked to prioritise coronavirus work, and Rajasthan has also stopped all immunisation and ante-natal care outreach programmes to enable this.

“In many places, ASHAs and ANMs are now busy following up with migrant workers who have returned from cities, to check them for Covid-19 symptoms,” said Mohan.

Concerns about migrant workers carrying coronavirus into rural areas prompted the central government to order states to set up temporary, two-week quarantine centres for them. But Dr Anand Das believes that TB should be an equally significant concern for the authorities.

“Many of the migrants who left Delhi include TB patients who are now stuck in quarantine centres with no medication and no one to care about their condition,” said Das, whose clinic had tried to get medicines for some of the TB-positive migrants while they were still on the road. Now that they are quarantined, Das and his team have lost contact with them.

Slipping through the cracks

In the case of HIV, patients largely depend on monthly antiretroviral drugs available at government centres in each district. Since the start of the coronavirus lockdown, activists and non-profit organisations in the field have been busy addressing calls from distressed HIV patients who have been unable to get their medication.

“It’s not that the antiretroviral treatment centres are closed – they are open and medicines are available, but without transport, many people cannot reach them,” said Mona Balani, an activist from the non-profit India HIV/AIDS Alliance. “Many are also afraid of the police stopping them if they go out to get their medicines.” This fear is based on the many reports of police brutality towards people stepping out of their homes, even if they were out to buy essential items.

Field workers from Balani’s organisation have managed to get travel passes in various parts of the country so that they can help supply medicines to people living with HIV. This has been helpful to patients in the National Capital Region, who had been having trouble getting their medicines from Delhi after the state’s borders were sealed for the lockdown.

But volunteer organisations can only help a limited number of HIV or TB patients, and there are many others who slip through the cracks.

“For everyone who is contacting us through various networks, there must be ten others who are not,” said Chapal Mehra, a public health specialist from the non-profit group Survivors Against TB. “The HIV community is very active, but across the board, I suspect that thousands of cases are not getting highlighted.” 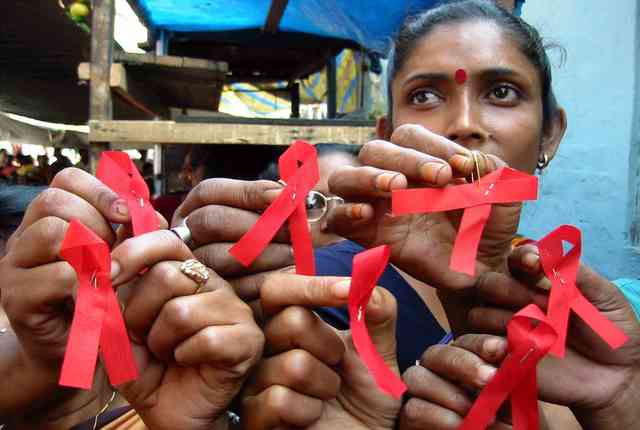 Another major problem with accessing HIV medication is the social stigma surrounding the disease. According to activist Ganesh Acharya, who has been working to help both HIV and TB patients in Mumbai, this has deterred many rural HIV-positive persons and their caregivers from venturing out to an antiretroviral treatment centre.

“The district treatment centres are often 30 or 40 kms far from their villages, and to get a travel pass to go there during the lockdown, people would have to disclose to their local police that they are HIV positive,” said Acharya, a TB survivor from Mumbai.

For Dr Anand Das, the attention being given to Covid-19 at the cost of other public health programmes for fatal diseases like TB is deeply ironic.

“Things that we have been saying in the TB programme for decades have fallen on deaf years all this time, but Covid has managed to convey it in two months,” said Das. He was referring to the principles of social distancing and maintaining personal and social hygiene, which are just as important for a highly infectious, air-borne disease like TB as they are for coronavirus.

“This is because Covid has struck the big people, the policy makers and upper class whose voices are more heard, while TB affects the poor,” said Das. “When Covid starts affecting the poor more, it will just be a new problem in addition to the many immune-deficiency problems they already face.”

Like Das, several other health workers and activists are concerned about the impact that the single-minded focus on Covid-19 might have on the rest of India’s healthcare.

“I have received calls from diabetics struggling to get OPD appointments,” said Ganesh Acharya. “If surgeries, OPDs and even private doctors’ practice are operating at a smaller scale, where will patients of diabetes, hypertension or cancer go?”

Dr Gagandeep Kang, the executive director of the Translational Health Science and Technology Institute, pointed out that in any healthcare system, urgent emergent problems – like Covid-19 this year – are bound to take priority. But she believes it is important to plan ahead so that delivery of preventive services like immunisation and the screening and treatment for diseases like HIV and TB are not negatively affected.

“We know from the Ebola outbreak in West Africa that the entire healthcare system was badly affected to the extent that they had many more deaths than usual of measles and malaria,” said Kang.

In Mumbai, Ranvir’s brother Suresh echoes the same sentiment. “We cannot blame the government for focusing on coronavirus right now, but it’s not fair to take the focus off other diseases like this.”